This study has assessed the effect of coenzyme Q10 among patients with systolic and diastolic blood pressure of pre-hypertensive of 50 participants including 30 males and 20 females were selected for this research according to their clinical diagnosis of pre-hypertensive symptoms, the study was placed in were seen in Al-Sader Teaching Hospital, in Misan hospital, Iraq. The patients were divided by half into the control group and the other group which received the Q10 within their diet and lifestyle for 12 weeks. The results showed that the daily consumption of coenzyme Q10 (200 mg) with significant improvements in both systolic and diastolic blood pressure in pre-hypertensive patients.

Elevated blood pressure is the most common and classic worldwide problem and a major burden in global health is prehypertension (preHTN) or Hypertension (HTN) as a main factor for increasing cardiovascular diseases, especially when combined with other metabolic diseases (Naidu BM, et al., 2019). The intermediary stage that occurs between normal blood pressure (preHTN), is connected to target-organ damage and sub-clinical atherosclerosis (Lyu QS and Huang YQ, 2018). Both preHTN and HTN indicate health issues and challenges for any developed nation, and the reason behind that is its quiet nature and lack of publicity regarding this subject (Aldiab A, et al., 2018). The target of this study was to put Q10 administration under evaluation and to detect its effect on systolic and diastolic blood pressure for patients with the pre-hypertensive diagnosis. The used parameter was according to the American college of cardiology in association with the American heart association which is normally BP: BP<120/80 mmHg while in high BP: BP ≥ 120 mmHg, furthermore stage 1 and stage 2 of HTN was (BP ≥ 130, ≥ 90 mmHg) accordingly (Stefely JA and Pagliarini DJ, 2017). The older aged groups showed a higher percentage of pre-HTN occurrence and risks of cardiovascular danger, diseases in both females and males according to an accomplished TLGs study in Tehran. There are some important indicators to be considered for preHTN patients such as ages, Systolic Blood Pressure (SBP), and Body Mass Index (BMI). In both genders<people who have a higher BMI are more likely to have preHTN< and they get older chances to have systolic and diastolic blood pressure, higher Triglycerides (TG), increasing of higher absolute cholesterol, increasing hemostasis model assessment insulin resistance, and increasing of fasting blood glucose, they’re chances become higher and risks are maximized. The results of this study present that the people with a lower percentage of two-hour post-challenge plasma glucose, a lower percentage of estimated glomerular Filtration Rate (FTR<) can be considered only in the independent predictor, on the other hand, women only have significant factors as predictors which are waist to hip ratio and diastolic blood pressure (Szkopińska A, et al., 2000). Recently in India, there was a study carried out which showed that an active lifestyle could protect from HTN and any combined problem like, stable or sedentary, lifestyle, military service, alongside a positive family history, while the major end enemy and a risk factor for HTN (Turunen M, et al., 2004). Another study also concluded that people who have a bad habit of extreme exposure and consumption of soft drinking, have an increased risk of HTN. Human blood vessels and microcirculation systems transform with rising BP. These changes are particularly clear for patients with serious Hypertension (Zhang Y, et al., 1995). In various stages, Hypertension can prompt fluctuating levels of cardiovascular dispersal change; some changes are brief or reversible (unstable changes, for example, prehypertension or stage 1 Hypertension), while others are irreversible (fatal changes, for example, stage 2 Hypertension and serious Hypertension, for which it is hard to restore the standard BP level). afterward, the cardiovascular circulatory structure will show unique reflections for different BP levels. Coenzyme Q10 can be identified as an organic molecular for the first time in Wisconsin (the USA,1957) by Fredrick Grane (Gutierrez-Mariscal FM, et al., 2019) it exists everywhere in the cell membrane and is focused especially in mitochondria in both forms reduced and oxidized (ubiquinol, ubiquinone) respectively. From the chemical side, CoQ10 is built up from a poly-isoprenoid side chain and benzoquinone group. CoQ10 in the human consists of 10 units and can be called ubiquinone. This molecule has the ability to keep continuous oxidation-reduction cycles as well as an electron carrier in excellent form (Boroujeni MB, et al., 2017). The concentration of CoQ10 is high in some organs like the heart, liver, and kidneys and the reason behind that is it needs it to support their high metabolic rate through efficient energy transport main work. There are some examples in the literature pointed to in the table below (Mantle D and Hargreaves I, 2019). The target of current research is to determine the effect of coenzyme Q10 blood pressure-lowering or in primary Hypertension.

Comparison between healthy and patient groups was calculated targeting the value of SD of systolic and diastolic blood pressure, as present in the following Table 1.The comparison was carried out between pre-hypertensive patients and a healthy group on their baseline characters by using an unpaired t-test. Significant differences were revealed through collected data difference in systolic and diastolic blood pressure was P>0.001 (Naidu BM, et al., 2019).

Table 1: Comparison of study parameters of prehypertension patients to that of healthy subjects at baseline

Table 2: According to demonstrated results in the above table p<0.05 value was recorded as a statistically significant difference after 12 weeks in contrast with baseline by using paired t-test

Figure 1: Comparison for systolic blood pressure before and after the treatment of study (12 weeks) 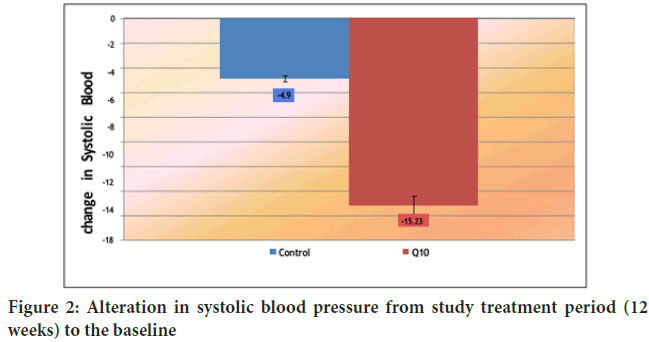 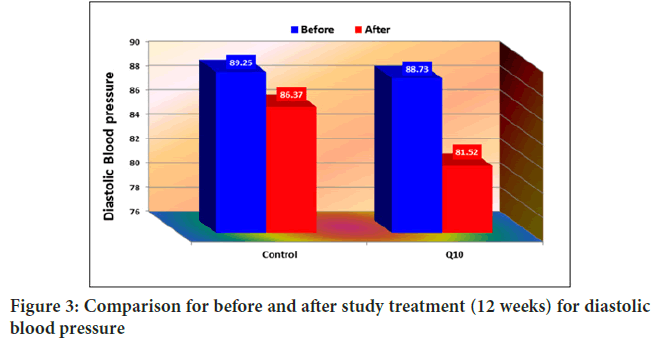 Figure 3: Comparison for before and after study treatment (12 weeks) for diastolic blood pressure 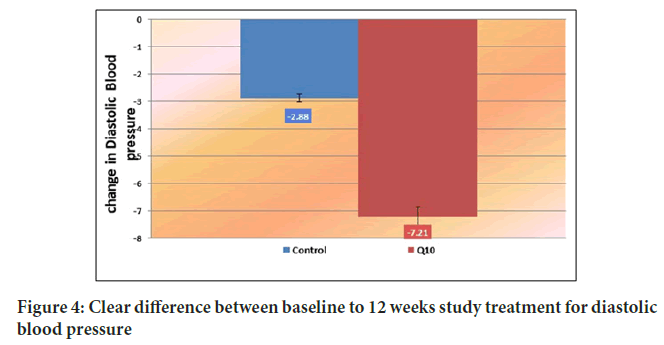 Significant decreasing was clearly in this study data for hypertensive patients at the end of the 12 weeks, which is decreasing in systolic and diastolic blood pressure (p>0.05) in terms of comparison with baseline measurements. Furthermore, CoQ10 showed a major effect on the endothelium putting the vasodilation under existing and, decreasing blood pressure (Parkinson Study Group QE3 Investigators, 2014). The reason behind this effect could belong to the ability of CoQ10 to improve nitric oxide bioavailability and working as a motivator for vasodilation particularly for patients with Hypertension. In addition to the fact that CoQ10 works on decreasing the level of aldosterone through making alteration on angiotensin effect in retention of sodium. Regardless of results of blood pressure that demonstrate in introductory trials pointed reducing by 6 and 5 mmHg in opposite to placebo in systolic and diastolic blood pressure (Digiesi V, et al., 1994). Confirmation of positive data was by an old meta-analysis of a Randomized Controlled Trials (RCTs). Randomized analysis of controlled for 17 trials that contained 684 subjects, been checked after consuming of CoQ10 supplementation, appeared significantly decreasing systolic blood pressure or Standardized Mean Difference (SMD) as 0.30, 95%, Cl-0.52, 0.08). While it doesn’t apply to diastolic blood pressure as SMD-0.08, -95%, Cl-0.46, 0.29). Moreover, CoQ10 alters the angiotensin effect within sodium retention and lowers the level of aldosterone (Ignarro LJ, 1989). In spite of exciting blood pressure results found within preliminary trials (systolic and diastolic blood pressure decreased by 6 and 5 mmHg vs. Placebo respectively). and the positive results shown by old meta-analyses RCTs, which is a new meta-analysis of 17 random moderated trials with 684 subjects revealed that CoQ10 supplements reduced systolic blood pressure (Standardized Mean Difference (SMD) -0.30; 95%, CI-0.52, -0.08) by a large margin, though this wasn’t the case with diastolic blood pressure (SMD-0.08; 95% CI-0.46, 0.29) (Fabre Jr LF, et al., 1965). With type 2 diabetes mellitus patients and target on blood pressure, the supplementation of CoQ10 has no change or modifying on the blood pressure (Langsjoen P, et al., 1994). In conclusion, besides promising collecting results, still more future work is needed as an unclear image of CoQ10 antihypertensive effect still present on the patients with primary Hypertension (Zhang P, et al., 2018).

50 people participated in the current study who were divided into males and 20 females all diagnosed with stage 1 priorities (HTN:BP ≥ 130 and ≤ 139 ≥ 80 and ≤ 89 mmHg) with various range of age about 30-65, all the patients were examined and checked clinically by a specialist physician in Al-Sader Teaching Hospital for having Hypertension. Diagnosis of prehyper-tension was done according to the criteria of the American college of cardiology and guidelines of the American heart association for different stages of hypertensive patients. Which are in a normal stage will be BP: BP ≤ 120/80 mmHg, While in elevated stage BP: BP ≥ 120, 129/<80 mmHg. Both stage 1 and stage 2 of HTN (BP ≥ 130 and ≤ 139 ≥ 80 and ≤ 89 mmHg) and BP ≥ 140/ ≥ 90 mmHg) accordingly (Galasko DR, et al., 2012; Müller T, et al., 2003). To become confident about the results of this study in regards to normal values parameters in order to have a clear image and good assessment of how much of used drug was able to normalize the abnormal parameters; therefore, another 20 patients were added to the existing 50 patients in this study, they were divided into 25 patients and treated with dietary control for 12 weeks associated with lifestyle modifications. On the other hand, another 25 patients were the same with the first group (Control group) from dietary control, lifestyle modification and 12 week dosage period. There was one difference which is that the patients that were treated with CoQ10 (200 mg) (Parkinson Study Group QE3 Investigators, 2014).

Reflecting on the collected data in this study it's easy to say that the consumption of coenzyme Q10 200 mg daily use could promote systolic and diastolic blood pressure in case of pre-hypertensive patients.