Management of Phlegmasia Cerulea Dolens Caused by a Giant Leiomyoma

This case is of a young female with a large uterine leiomyoma causing phlegmasia cerulea dolens with thrombosis of the left common and left external iliac veins. She underwent mechanical thrombectomy to temporize the condition until she could be evaluated by gynecology- oncologist to remove the cause of venous obstruction.

Uterine leiomyomas are the most common pelvic tumor, found in pre-menopausal women (Stewart EA and Tommaso SKL, 2019). There have been reports of leiomyomas causing compression of the right common iliac vein and subsequent development of Deep Vein Thrombosis (DVT). We report a young female who presented with phlegmasia cerulea dolens secondary to compression of the left common iliac vein by a large uterine leiomyoma. She underwent mechanical thrombectomy to temporize her condition prior to total abdominal hysterectomy. Informed consent was obtained for all procedures and publication of this case report, including all accompanying images (Plate G, et al., 1984).

A 46 year old female presented to the emergency department with complaint of left lower extremity pain of two days duration. Swelling originated around the ankle with progression to the groin. Medical history was significant for oral contraceptive use and a known uterine leiomyoma, approximately 10 cm at last evaluation. Physical exam revealed left lower extremity swelling extending from foot to mid-thigh with erythematous discoloration of skin (Figure 1). Biphasic Doppler signals in left posterior tibial and dorsalis pedis arteries were present with triphasic signals on the right side. Motor and sensory function was intact in both lower extremities. 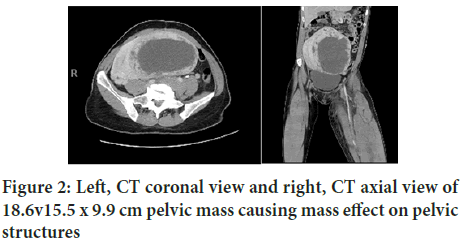 A left lower extremity venogram with access through the left popliteal vein, demonstrated thrombus within left femoral and common femoral veins and chronic near complete occlusion of the left EIV and the entire portion of the left CIV. A 30 cm infusion length UniFuse catheter (Queensbury, N.Y.) was placed with the treatment area from proximal IVC to the distal femoral vein. Overnight, thrombolysis was initiated with Tissue Plasminogen Activator (tPa).

The Infusion catheter was removed after 12 hours. Left lower extremity venogram demonstrated persistent thrombus within the left femoral vein. There was persistent lack of flow within the distal left external iliac vein and the left CIV.

Angioplasty, with a 4 × 40 mm Armada balloon (Abbott Park, IL.) was performed within the IVC, left CIV and EIV for purposes of pre-dilatation prior to mechanical thrombectomy with the Inari, a 105 cm × 16 mm Clottriever (Irvine, CA.), in order to gain access into the lumen. Mechanical thrombectomy of the proximal IVC left CIV, EIV, common femoral and femoral veins with retrieval of a large amount of acute, subacute and chronic appearing clot (Figure 3). A completion venogram demonstrated complete removal of the thrombus within the left femoral, common femoral and the visualized portions of the proximal EIV. Flow was present within the left CIV with contrast seen entering the IVC. There was chronic stenosis of the left CIV and EIV secondary to mass effect of the uterus.

A suprarenal Option-Elite IVC filter (Athens, TX.) was placed prior to surgery for excision of pelvic mass. Systemic heparin was held 6 hours prior to surgery. She underwent total abdominal hysterectomy with bilateral salpingectomy, with preservation of normal ovaries. Pathology showed the mass to be a large benign leiomyoma measuring 18 × 18 cm. 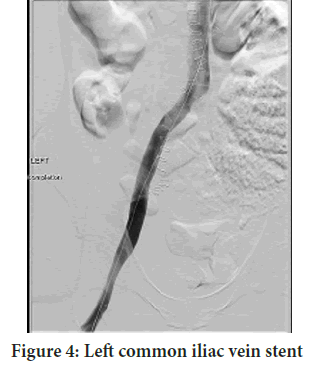 Her post-operative course was complicated by adynamic ileus that resolved with conservative management. She required blood transfusion due to steady drop in her hematocrit. CT arteriogram of abdomen and pelvis showed large pelvic hematoma with extravasation. However, angiography failed to show active bleed, likely caused by missed bleed during hysterectomy. Anticoagulation was held until hemoglobin stabilized. She was discharged on hospital day 15 on oral Apixaban 5 mg twice daily. Her left lower extremity edema had much improved, (Figure 5). She returned two months later and had the IVC filter retrieved. Follow up office visit three months later showed patient left CIV and EIV stent. Phlegmasia Cerulea Dolens (PCD) is a precursor of venous gangrene. It is a limb and life threatening condition with a mortality of 20-40%, and 30% of those deaths caused by pulmonary embolism (Chaar CIO, Satoskar S, 2019). DVT is diagnosed in about two million Americans every year, but PCD is rare. PCD is also known as “milk leg” due to its association with third trimester pregnancy and postpartum state, even though it is more prevalent in men with a ratio of 1.5:1 (Weaver FA, et al., 1988). Patients present with pain followed by significant swelling and cyanosis secondary to collateral vein involvement, causing massive fluid shift into interstitium, obstruction of arterial flow, and ultimately capillary involvement leads to venous gangrene (Reddy MHK, et al., 2016).

May-Thurner Syndrome (MTS), is compression of the proximal segment of the left CIV by the right common iliac artery, it is rarely the differential for acute DVT, although can be associated with chronic thrombus. The most common variant found in about 20% of the population is the compression of the left iliac vein by the right iliac artery against the lumbar spine causing collagen deposition in the vein known as venous spurs (May R and Thurner J, 1957). Consequential venous stasis increases the risk of DVT.

Risk factors for MTS overlap with the risk factors for DVT. These include female gender, especially those using oral contraceptives or in the postpartum period, scoliosis, and thrombophilias. This case did not involve this anatomic defect of compression of iliac vein by iliac artery, but instead was caused by the direct compression of left iliac vein by enlarged fibroid uterus.

Patients with DVTs are generally placed on systemic anticoagulation to prevent further thrombosis. In this case, catheter directed thrombolysis as well as mechanical thrombectomy was utilized until hysterectomy with bilateral salpingectomy was performed, addressing the etiology of this extensive DVT. There have been several case reports of uterine mass causing occlusion to venous flow. However, it is difficult to effectively treat the phlegmasia and venous thrombosis without treating the underlying cause, such as pelvic mass.