Background: Temporomandibular Joint (TMJ) is a complex structure composed of several components including glenoid fossa of the temporal bone, the condylar head of the mandible, articular disk, as well as several ligaments and associated muscles. Its ankylosis causes distressing conditions including, both functional and aesthetic problems. An anesthetic management is challenging and surgery of TMJ ankylosis falls into the category of difficult airway as direct vocal cord visualization is difficult due to an inability to open the mouth. Fiberoptic intubation is considered as a safest approach and gold standard in TMJ ankylosis surgery as means of airway securing.

Objectives: The aim of this study was to assess method of airway securing in patients treated for Temporomandibular Joint ankylosis at Addis Ababa University Oral and Maxillofacial surgery affiliate Hospitals.

Temporomandibular Joint (TMJ) is a complex structure composed of several components including glenoid fossa of the temporal bone, the condylar head of the mandible, and a specialized dense fibrous connective tissue structure, the articular disk, as well as several ligaments and associated muscles (Al-Rawee RY, et al., 2019). The TMJ is a specialized joint that can be classified by anatomic type as well as by function. From an anatomic standpoint, the TMJ is classified as a diarthrodial joint, which is a discontinuous articulation of two bones allowing freedom of movement that is dictated by the associated muscles and limited by the associated ligaments (Miloro M, et al., 2012).

TMJ ankylosis is defined as fusion of the head of mandibular condyle to the glenoid fossa of temporal bone. It usually occurs before the age of 10 years, but could develop at any age (Kumar N, et al., 2016). TMJ aknylosis can be classified as bony, fibrous and fibosseous depending on the type of tissue involved. Unilateral or bilateral according the side of involved joint (Alyami YD, et al., 2020). The causes of the TMJ ankylosis are well-known trauma and infection of local or systemic origin (Yan YB, et al., 2014; El-Hakim IE and Metwalli SA, 2002; Kumar R, et al., 2013; Braimah RO, et al., 2018). Trauma, which is the most important etiologic factor in causing TMJ often resulting in haematoma, which eventually organizes and ossifies (Güven O, 2000).

The surgery of Temporomandibular Joint ankylosis poses a significant challenge because of technical difficulties, problem of airway securing and the high incidence of recurrence after surgical procedure. The management goal in TMJ ankylosis is removal of the ankylotic mass, restoring the form and function of the joint, mouth opening, relief of upper airway obstruction, and prevention of recurrence (Hossain MA, et al., 2014; Gupta VK, et al., 2012).

An anesthetic management is challenging and surgery of TMJ ankylosis falls into the category of difficult airway as direct vocal cord visualization is difficult due to an inability to open the mouth. Securing the airway is fundamental to the practice of general anesthesia. There are are different techniques of securing airway in patients with TMJ ankylosis surgery including; fibro optic, blind nasal, oral and tracheostomy (Shaeran TA and Samsudin AR, 2019).

Awake intubation and spontaneous ventilation are the safest techniques for securing airway in TMJ ankylosis, as these patients should never be given relaxants till the control of airway is achieved. Awake intubation needs patients co-operation, local blocks for nerves of larynx and topical anesthesia for upper airway (Wahal R, 2015).

The anesthetic management of pediatric patients with TMJ an- kylosis presents a real challenge to the anesthesiologist. Technically it encompasses both: management of pediatric patients, and difficult airway scenario. Awake fibreoptic intubation with topical anesthesia is regarded as the safest approach in anticipated difficult intubation. Topical anesthesia and vasoconstrictors prevents bleeding and widen the nasal passages (Jaju SR, et al., 2018).

Clinical records and charts of patients treated for TMJ ankylosis for three years from January 2017 to December 2019 were retrieved from both Yekatit 12 Hospital medical college and St. Peter’s specialized Hospital. The structured checklist format was filled by trained personnel. The collected data was analyzed by using EPI-INFO 7 computer software. 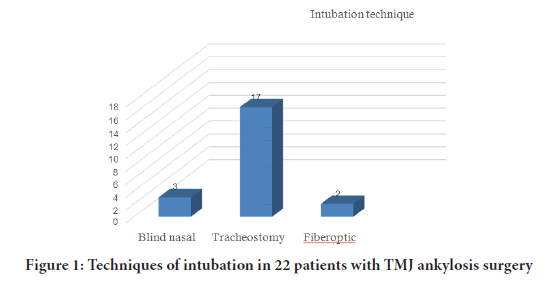 Figure 1: Techniques of intubation in 22 patients with TMJ ankylosis surgery

Temporomandibular Joint ankylosis is fusion of head of mandibular condyle to the glenoid fossa of temporal bone and it is a common disorder of the Temporomandibular Joint. This study was based on retrospective chart review in 22 patients who had been operated for TMJ ankylosis from January 2017 to December 2019. In this study, the distribution of males and females were equal 11 (50%). In contrast to this study, male predominance was reported in previous studies (El-Hakim IE and Metwalli SA, 2002; Punjabi SK, et al., 2013; Bello SA, et al., 2012).

The age range from 6-50 years with mean of 21.7 years and the frequency of TMJ ankylosis was highest in second decade (11-20 years) 9(40.91%) followed by third decade (21-30 years) which account for 7(31.82%). It may be due injury to TMJ in growing population remains unreported due to lack of facilities, trained professionals in diagnosis and lack of awareness subsequently leading to ankylosis. The finding of most frequently occurring age group was the same with the study done in Pakistan and Egypt as reported second decade was the most frequent age group (Hossain MA, et al., 2014; Elgazzar RF, et al., 2010).

In this study, the frequency of unilateral ankylosis was more predominant 13(59.09%) than bilateral ankylosis. This result was in line with the finding of other literatures (Vasconcelos BC, et al., 2011; Mabongo M and Karriem G, 2014). It was found that bony ankylosis reported in majority 15 (68.18%) of cases. However, this number was still less when compared to other studies (Tefera T, 2019). This difference could be accounted for by variations in types and mechanism of injury, age of patient and duration of ankylosis during diagnosis.

Administration of anesthesia to patients with TMJ ankylosis poses specific problems and demands expertise. In current study, tracheostomy was done in majority of patients 17(77%) as means of intubation technique and only 2(9%) patients were intubated using fiberoptic. In the study conducted in South Africa fiberoptic was used in (50%) of patients and tracheostomy was done only in (17.5%) cases. The use of fiberoptic in this study is much less when compared to the study conducted in South Africa (Mabongo M and Karriem G, 2014). Blind awake intubation was successful in majority 92% of the cases done in India (Sankar D, et al., 2016), which is completely incomparable with our study finding only 14% were intubated by blind nasal. This lowest number of fibroptic and blind nasal intubation in our current study may be due an availability of fibroptic and lack of skilled anesthesiologist in practice of these techniques. Fiberoptic intubation is considered as a gold standard in TMJ anklosis surgery as means of airway securing. Tracheostomy is an invasive procedure with a post-operative morbidity (Shaeran TA and Samsudin AR, 2019).

Even though fibroptic is the golden standard for TMJ ankylosis surgery, in our study we found that tracheostomy was the most commonly used intubation technique, due to unavailability of fibroptic in the institutions and few patients 2(9%) operated on campaign intubated using fibroptic by team of maxillofacial surgeons from Canada at St. Peter specialized Hospital.

However, tracheostomy is an invasive procedure with a post-operative morbidity. Institutional capacity building of facilities; increasing service availability and trained professionals in practice of fibroptic and blind nasal intubation techniques is recommended. The anesthesia department should establish guidelines or algorithm specific to their institution depending on the expertise and the facility available in regard to TMJ anyklosis surgery.

My special thanks to my wife Chaltu Temesgen, would not have done this without her support and my little kids kaya and Marin.