Introduction: Patients with implanted Intra-Aortic Balloon Pump (IABP) after cardiac surgery present a unique challenge to intensivists in many terms including fluid management. One way to objectify fluid institution is to predict fluid responsiveness-whether cardiac output is to be increased after a fluid bolus-using a mini fluid challenge test. That elegant bedside test is simple and reduces fluid overload risk compared to classic fluid challenge.

Materials and methods: Patients with implanted IABP in the early period after open heart surgery were included in this study. A mini fluid challenge test was conducted. Cardiac output measurements were obtained before and after fluid bolus of 2 ml/kg body weight. Afterwards a fluid bolus of 4 ml/kg was administered and cardiac output was measured again.

Conclusion: IABP patients may benefit from a mini fluid challenge as an efficient predictor of fluid therapy response.

The presented study includes two core concepts-fluid responsiveness and intra-aortic counter-pulsation. Fluid responsiveness stands for the ability of the heart to increase its output by 10% or more in response to a fluid bolus (Marik PE, et al., 2009). Being fluid responsive means that the heart is functioning on the steep part of Frank-Starling curve but also that a fluid bolus is able to increase venous return to the heart by increasing mean circulatory filling pressure and stressed venous blood volume. The most straightforward way to test for fluid responsiveness is to institute fluid bolus (around 6 ml/kg) and evaluate the circulatory response-fluid challenge (Toscani L, et al., 2017). That approach turns out to be problematic in practice, because very often the test needs to be repeated several times during the day and that leads to fluid overload. For that reason the mini fluid challenge test was developed. It became evident that as little as 2 ml/kg or about 150 ml of fluid was enough to elicit a small increase of cardiac output (about 7%) in fluid responders (Muller L, et al., 2011). There is lack of scientific data regarding mini fluid challenge in the setting of IABP after cardiac surgery.

IABP is an invasive circulatory support device which increases diastolic aortic pressure and decreases cardiac afterload (Maccioli GA, et al., 1988). It is used to treat refractory cardiogenic shock. IABP is essentially a balloon tipped catheter placed in the descending aorta, with the balloon being inflated during diastole and deflated during systole. Patients with implanted IABP after open heart surgery differ significantly from other populations of critically ill patients. Not only have they been subjected to vast intravascular volume swings intraoperatively, but also they are presenting with a varying mixture of cardiogenic and distributive shock. These reasons justify a doubt in the usefulness of mini fluid challenge in that patient population. The aim of this study is to evaluate the predictive value of mini fluid challenge for fluid responsiveness in the setting of IABP after cardiac surgery.

Patients after cardiac surgery were enrolled in this study after hospital ethics commission approval was gained. An informed consent was obtained from all candidates in the preoperative period. Inclusion criteria were:

Patients included in this study underwent open heart surgery-elective or emergent. A registered specialist in cardiac surgery was team leader in all cases. Anesthetic and operative techniques were standardized and no changes were made during the period of the study. Available equipment was not changed either. Cardiopulmonary bypass technique was also standardized.

For safety reasons hemodynamic variables (Mean Arterial Pressure, Central Venous Pressure, Heart Rate) were closely monitored during fluid loading and testing was to be terminated if signs of hemodynamic decompensation occurred. No such event ensued in any patient.

After application of the inclusion criteria 30 patients were selected for this study. Data was collected for the period August 2018-August 2019. Patients American Society of Anesthesiology (ASA) class was III or IV. 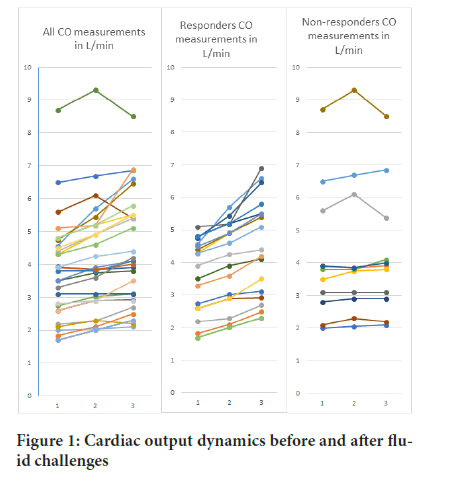 Figure 1: Cardiac output dynamics before and after fluid challenges 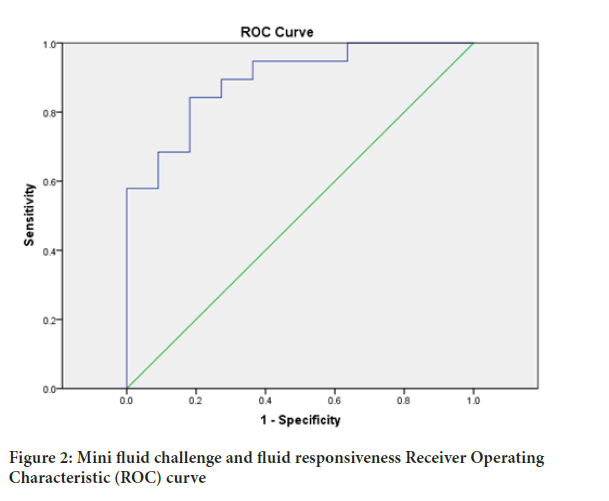 Our results point out that cardiac output change of 7.7% after mini fluid challenge with 2 ml/kg Gelafusine is a fairly good predictor of the hemodynamic response to 4 ml/kg fluid challenge. A typical bolus dose in common practice would be about 6 ml/kg. Thus a reasonable recommendation would be if one is aimed at fluid loading to start with a small bolus and to evaluate cardiac output and all other hemodynamic data available before continuing. Not surprisingly, this strategy was proposed many years ago in the dawn of fluid therapy. During one outbreak of cholera in 1832, Latta was the first to conclude intravenous infusion of fluid is able to improve dehydrated dying patients condition (Latta T, 1832). He experimented to put in small increments of water mixed with salt through a peripheral vein and observed the patient closely after each bolus. Initially no response was noted, but gradually after about 2.5 liters the patients got better and “were cured”. Empirical uninterrupted infusion of large amounts of fluid is unphysiological and easily leads to unnecessary complications in critically ill patients (Vincent JL, 2011).

This is the first study to address mini fluid challenge in patients with implanted IABP. It delivers important data regarding fluid responsiveness rate among these patients, estimated at 63% by our group. This study shows also, that a single 6 ml/kg fluid bolus can be given to the examined patient population in the early postoperative period without hemodynamic compromise. One needs also to bare in mind that the presented study has some important limitations. It is a small single center study, which could result in significant statistical bias.

Mini fluid challenge testing is an important opportunity not to be missed in the resuscitation of critically ill patients. It is a valid predictor of fluid responsiveness when coupled with pre and post cardiac output measurements. According to the presented results patients with implanted IABP device can be reliably identified as responsive or not responsive to fluid using a mini fluid challenge.