Objectives: To determine the prevalence of controlled systemic hypertension and its associated risk factors among the hypertensive patients who attended the clinic at Mbeya Zonal Referral Hospital in Tanzania.

Conclusion: Prevalence of controlled hypertension is higher among patients who have regular clinic visit and have daily adherence to their anti-hypertensive medication. Also, it is higher among participants without financial challenges to attend clinic so they can have regular clinic visit and checkup. Reinforcement on regular drug intake and clinic visit, good nutrition and reduced salt intake and modifying lifestyles of patient with hypertension is important.

Hypertension is among the leading causes of death in Tanzania, and also it is a public health rattrap. This affecting most people in Tanzania, whereby life modification factors are less considered. It is a common non-communicable disease which may lead to cardiovascular diseases, heart failure and sometimes sexual dysfunction (American Heart Association, 2020).

In 2010, the global burden of hypertension was estimated at ~1.4 billion, and is likely estimated to exceed 1.6 billion by 2025. In 2016, non-communicable diseases accounted for 40.5 million or 71% of deaths globally; 17.9 million (44%) of non-communicable disease related deaths were due to cardiovascular disease with hypertension as the leading risk factor (World Health Organization, 2013).

Studies done in Sub-Sahara Africa (SSA) indicate that hypertension is a widespread problem, and it has been reported to be as high as 38% in some communities. It is estimated that out of the approximately 650 million people in SSA, between 10 to 20 million may have hypertension however many countries in SSA still lack detailed information on the prevalence of hypertension. Hypertension is a growing public health problem in Sub-Saharan Africa (Guwatudde D, et al., 2015).

Among patients who have detected HTN, few are taking treatment and, among those on treatment, very few are controlled (Musinguzi G, et al., 2015). Untreated or uncontrolled, hypertension is the single largest contributor to cardiovascular disease globally, causing stroke, heart failure, coronary artery disease, and kidney disease, and also is a major contributor to kidney disease (Fisher ND and Curfman G, 2018).

Hypertension is often called ‘the silent killer’ because it is a disease that shows no early symptoms, and simultaneously, is the single most significant risk factor for heart disease, The complications of hypertension are related either to sustained elevations of blood pressure, with consequent changes in the blood vessels and heart, or to the accompanying atherosclerosis that is accelerated by long-standing hypertension (Feng X, et al., 2013).

Hypertension burden is increasing in East Africa, local studies done in 2017 have shown an extensive evidence of growing burden of hypertension in Tanzania with variation in prevalence, there is extensive evidence of the growing burden of chronic diseases in both rural and urban populations of Tanzania (Isungula K and Meda J, 2017). Between 1990 and 2000, the prevalence of hypertension ranged from 3%-27% in rural and 5%-39% in urban. Between 2000 and 2016, hypertension prevalence ranged between 13%-70% in rural and 12%-65% in urban (Isungula K and Meda J, 2017).

A study done in states that hypertension in sub-Saharan Africa is a widespread problem of immense economic importance because of its high prevalence in urban areas, its frequent under diagnosis, and the severity of its complications (Opie LH and Seedat YK, 2005). In Tanzania for example, a study done in Northern Tanzania in 2019 showed the complications such as heart failure, stroke, renal failure, ischemic heart disease, chronic kidney disease (Hertz JT, et al., 2019).

Several factors related to poor control include ageing, obesity, lack of exercise, gender, race, access to health care, drug adherence and co-morbid conditions such as diabetes. Results from studies suggest that it may be possible to solve this public health problem. This requires interdisciplinary approaches to increase patient awareness and physician adherence to guidelines to realize the full benefits of hypertension research. Controlled hypertension is key to prevent hypertension related complications such as stroke, chronic kidney disease and heart failure (Chiong JR, 2008).

In a study done involving six countries in Sub-Saharan Africa around 2018, showed that between 44% to 93% of hypertensive patients were unaware of their disease, only 18% were on medication, and a mere 7% achieved adequate blood pressure control overall (Antignac M, et al., 2018). Also, in study done at Mafia Island in Tanzania around year 2016, out of the 118 participants who were aware of having hypertension, 68 (57.6%) were currently taking medication. From those taking medication, only 14 (20.6%) had controlled hypertension (Muhamedhussein MS, et al., 2016). Therefore aim of this study was to determine the prevalence of controlled systemic hypertension and its associated risk factors among hypertensive patient attending clinic at Mbeya Zonal Referral Hospital, Tanzania.

This study was conducted at Mbeya Zonal Referral Hospital. Mbeya Zonal Referral hospital is the largest government hospital in Southern part of Tanzania, the hospital was formally upgraded from the former Mbeya regional hospital back in 1984. The hospital serves approximately 8 million people in seven regions namely; Katavi, Njombe, Rukwa, Ruvuma, Iringa, Songwe and Mbeya. In the realm of providing both preventive and curative health care services in the zone. The study conducted at MZRH and data collected from September to November 2020.

The study included all hypertensive patients aged 18 years and above.

All hypertensive patients attended at Mbeya Zonal Referral Hospital and were under anti-hypertensive drugs, who were having illness for at least 6 months, above 18 years of age and those who were willing to participate were included.

All hypertensive patients not on medication, less than 18 years of age and those who refused to participate in the study.

Study participants were drawn from patient attending at hypertensive clinic at Mbeya Zonal Referral Hospital. Patients were excluded if they refused to sign informed consent. Patients’ age, sex, marital status, educational level, employment, use of anti-hypertensive medication, frequency of use of medication, regular visit of clinic, presence of co-morbid condition such as diabetes and obesity, life style risk factors like cigarette smoking and alcohol consumption, use of other drugs like steroids and anti-retroviral and duration of disease were recorded on structured questionnaires.

Data was collected from the participants by two ways by using questionnaire and by measuring two blood pressure measurements using aneroid sphygmomanometer after five minutes of rest. Self-administered Questionnaire prepared in English and Swahili language and was used to obtain information from all hypertensive patients aged 18 years and above who attended at clinic during study time.

The data analysis planned to include descriptive and inferential statistics; data were entered into Microsoft excel and then exported to Statistical Package for Social Sciences software (SPSS version 25.0) for further analysis and presented on the percentages and table, regression analysis was used when making comparisons between hypertensive patients with controlled hypertension and those with uncontrolled HTN. The analysis of strength of relationships between categorical variables were conducted using the Chi-square test. A p-value of <0.05 was considered to be statistically significant.

Clearance obtained from CREC and permission to conduct this study granted by Medical officer in-charge Mbeya Zonal Referral Hospital. Individual consent was considered and confidentiality was guaranteed. No participant name filled in the form to ensure confidentiality and right to withdraw. 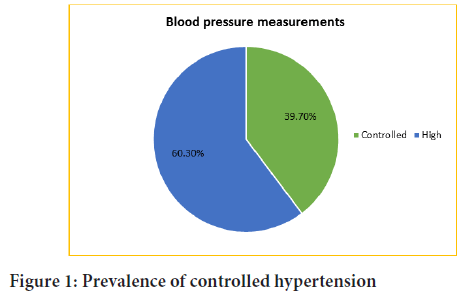 The prevalence of controlled hypertension was higher among patients who have regular clinic visit and have daily adherence to their antihypertensive medication. A similar trend was observed among participants without financial challenges to attend clinic, short duration of illness, higher level of education (Table 2).

The results of our study were analyzed using chi square test to find the risk factors associated with controlled hypertension. Controlled hypertension was found to have significant association with a number of variables, that included tribe (p=0.012), physical activities (p=0.000), regular clinic attendance (p=0.000), adherence to antihypertensive medication (p=0.000), use of table salt (p=0.000), occupation (p=0.000), earning per month (p=0.018), education (p=0.021) and duration of illness (p=0.037). There was no association between age, sex, marital status, smoking, alcohol consumption, having health insurance and having chronic illness (Table 3).

The difference in prevalence of controlled hypertension between various studies and this study can be explained by difference in socio-cultural aspect that affect the life style in different areas such as diet, occupation and ethnicity (Dorans KS, et al., 2018). Also, the time frame from which this study was done which is shorter compared to other studies. The study involved few participants (252 participants) compared to study done by American Heart Association (AHA) in 2018 which involved 38276 participants (Dorans KS, et al., 2018).

The results of our study showed a significant association of occupation, level of education, earning per month, adherence to antihypertensive, having regular clinic attendance, reduced use of table salt, exercise, short duration of illness and controlled hypertension (Muntner P, et al., 2020). This was similar to the study done in USA by JAMA Network in 2020 that showed increased prevalence of hypertension control among US adults with HTN among those with vs. those without a usual health care facility visit (48.4% vs. 26.5% respectively) (Muntner P, et al., 2020).

Likewise, study done in India in 2017 showed that high education level was useful in controlling BP among hypertensive patients (Roy A, et al., 2017). Moreover, similar findings were reported in study done in Southwest China in 2017, in which reduced salt intake, adherence to medication, exercise, and high economic status were responsible for controlled hypertension among those hypertensive patients on medication (Liu X, et al., 2017).

The authors acknowledge with thanks, the provision of grants to conduct this research, RMO, collaborators Dr Peter Lawrence, Dioniz, Regina Mvandal. Further, we are grateful to those who were involved in the field and data collection in Mbeya, in particular Erick Msemwa. Our special thanks go to all who hypertensive patients who participated in the study.