Non-Steroidal Anti-Inflammatory Drugs (NSAIDs) are the most widely prescribed drugs worldwide. They act as analgesic, anti-pyrectic and anti-inflammatory agents. This class of drug reduces pain, inflammation, lower down body temperature. They act by slowing the formation of prostaglandins and also blocks cyclooxygenase enzyme. This reduces inflammation. The major drawback is considered to be its gastrointestinal ulcers and bleeding, heart attack and kidney disease. Tolmetin sodium is used for its anti-inflammatory activity. Present therapy of Tolmetin sodium indicates the oral route of administration. Side effects of tolmetin sodium that have been recorded include gastrointestinal ulcers and hepatotoxicity. To overcome the side effects of tolmetin sodium, topical administration can be preferred over oral administration.

Skin is a major barrier for topical dosage form. It affects the systemic bioavailability of drug. Release of tolmetin sodium from topical gel can be increased in various ways. The activity of the drug in topical formulation with carbomer base is found to be highest as compared to that of Hydroxypropyl methylcellulose base. Polymers showing synergism can be used to increase release rate which increases the potency of Tolmetin sodium in gel formulation. This enhancement of release rate increases the bioavailability of the drug in the systemic circulation.

The system in which the drug is carried through the skin is called as a topical drug delivery system. Skin is considered a major barrier in topical drug delivery systems. Topical formulation is applied externally as well as internally. The external preparations are applied on the cutaneous layer whereas internal topical preparation is applied on mucous membrane or cavities (Sharadha M, et al., 2020).

The intricate network of epidermis, dermis and hyper dermis forms body’s initial barrier against pathogenesis. The thickness of skin varies depending on the region due to differences in demand and epidermal layer (Yousef H, et al., 2017). It is the thick layer of fibrous, elastic tissue. It contains collagen, elastin and fibrillin which gives it elasticity and strength. Sweat glands, oil glands, hair follicles, nerve endings are present in this layer (Gilaberte Y, et al., 2016) (Figure 2). 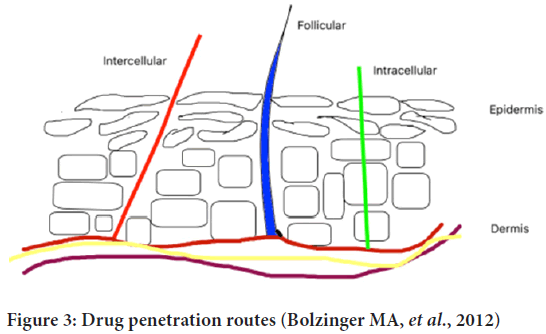 Mechanism of absorption of drug through skin

Drug transport inside the stratum corneum lipids is controlled by its diffusion coefficient across it along with the partition coefficient between drug formulation and stratum corneum lipids. The physical parameters like, molar mass which determines diffusion coefficient, the number of Hydrogen Bond Donors (NHD) and Acceptors (NHA) controls interaction with surface corneocytes and log P represents stratum corneum-water partition are required to consider while drug release through skin. The Lipinski’s rule of 5 has been extended to biological barriers where Mw >500, NHD>5, NHA>10 or lop P>5 (Bolzinger MA, et al., 2012).

Synergy can be defined as the effect of the combination of agents that is more than their expected additive effect like 1+1=2. Synergism of 2 components helps to lower doses of each drug and hence less adverse effects will be seen. Super additivity and coalism are similar terms to synergy (Roell KR, et al., 2017).

Gels are semisolid preparation in which one or more solute is dispersed in the solvent phase forming a network of molecules. Sol (the liquid state in which solute is dispersed) and gel state may show reversibility due to polymers used, but few polymers form a covalent bond because of which it exhibits irreversibility. The stiffness of gel is because of the interlinking chain formed by the gelling agent (Rathod HJ and Mehta DP, 2015).

Gels are classified based on the nature of the solvent used (Jeganath S and Jeevitha E, 2019).

• Hydrogels-These are based on water as solvent system

• Organogels-These are based on a non-aqueous solvent system

Based on colloidal properties:

Based on polymers used:

The linking of molecules of polymer gives a structure of the gel. Collagen, guar gum, gelatin are a few natural polymers whereas carboxymethyl cellulose, hydroxy methyl cellulose is semisynthetic, and synthetic includes Carbopol 940, poloxamer. Bentonite and cebrostearyl alcohol are some inorganic examples of polymer (Verma A, et al., 2013) (Table 1).

NSAIDs are used for the treatment of muscle pain, dysmenorrhea, and arthritis condition as they show antipyretic, analgesic and anti-inflammatory activity. Among the NSAIDs, tolmetin sodium, the drug containing a pyrrole ring is one of the emerging drugs that show its activity on rheumatoid arthritis, juvenile rheumatoid arthritis, degenerative joint disease and spondylosis (NLM, 2020) (Figure 4). 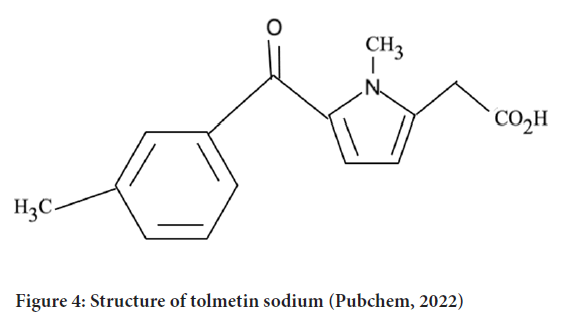 Tolectin is prescribed for acute flares as well as long-term therapy of rheumatoid arthritis, juvenile rheumatoid arthritis, osteoarthritis. Tolectin should not be administered in patients who have asthma, urticaria or those who show allergic reactions on the administration of NSAIDs. As COX-2 selective and nonselective drugs have been proved to increase the risk of cardiovascular thrombotic events, myocardial infarctions and strokes. Tolectin is not advised to give in pre-operative pain for coronary artery bypass graft surgery. Tolectin may worsen the condition in hypertension patients and may cause serious gastrointestinal side effects including bleeding, inflammation and ulceration.

According to the studies carried out by Baloglu B and Kirkaǧaçhoǧlu O, 2002, tolmetin sodium conventional suppositories were prepared by using polyethylene glycol 400 and polyethylene glycol 4000 in various proportions as a base. Sustained-release suppositories were prepared by using eudragit L-100 which showed slow release and zero-order kinetics in dissolution studies (Figure 5). Eudragit L-100 was confirmed to be responsible for the sustained release of tolmetin sodium.

As per the studies by Ramadan AA, et al, 2018, rectal mucoadhesive hydrogel can be a better option for oral administration of tolmetin sodium. The studies were directed to formulation and evaluation of mucoadhesive rectal hydrogel of Tolmetin sodium using various proportions and concentrations of hydroxy methylcellulose, hydroxyethylcellulose, carboxymethyl cellulose and sodium alginate as polymers. The release profile showed a concentration of 72%-92.6% of the controlled release pattern of tolmetin sodium.

The evaluation and selection of the most precise assay procedures to determine the composition of a drug is known as analytical method development. The analytical method development is a procedure to demonstrate the identity, characteristics, purity, potency of a drug. It includes evaluation as well as the selection of process that is precise for the determination of drug composition. The method selection of analytical procedure depends upon certain parameters like analyte physical and chemical properties, concentration and no. of samples.

Advantages of analytical method development include minimum repetition of procedures, providing surety of analyte as well as process (Doltade M and Saudagar R, 2019).

For spectrophotometric determination of tolmetin sodium, two modes that are zero-order and first-order were used to determine absorption at 325 nm and 342 nm (Table 4). The standard curve method and linear regression method were used to find out the concentration of unknown sample. Zero-order spectra peaked at 245 nm and 325 nm whereas first-order spectra peaked at 300 nm and 342 nm in the range 200 nm to 400 nm. Linear regression (r) resulted at 95% confidence limit as 0.9997 and 0.9995. Both methods used proved appropriate and suitable for the determination of tolmetin sodium.18

Effect of penetration enhancer on release of tolmetin sodium

Release of tolmetin sodium from carbomer: Carbomer is the base of choice for gel formulation for topical preparations because of its viscosity parameter (it shows high viscosity even at low concentration) as well as it is non-toxic and exhibits antimicrobial properties to itself (Macedo T, et al., 1993). Different types of drug concentration, carbomer concentration in different composition drug release studies were carried out. Drug release comparison showed that Carbopol 941 showed fastest, 940 showed slowest and 934 were intermediate.

All the polymers showed increased penetration of the drug.

• The use of propylene glycol and oleic acid together showed synergistic enhancement in drug flux.

Drug flex of a solute can be stated as the mass or no. of molecules moving through a given cross-sectional area during a given period of time.

Where J is flux, m is mass of the compound whose flux is to be calculated and A is cross-sectional area.

The characteristics of penetration enhancer are similar to that of lipids in stratum corneum that allows efficient portioning with the compartments but are not similar enough to damage lipid packaging.

I would like to acknowledge Shri DD Vispute college of Pharmacy and Research Centre for providing necessary support in the due course of the work.


Citation: Sakshi G: Use of Polymers Showing Synergistic Effect to Increase the Release of Tolmetin Sodium in Topical Gel 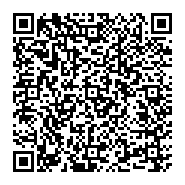